There were times when I wondered why wildlife and bird photographers were so excited about shooting. Having a greater preference for portrait photography, I wanted to see for myself the cause for this excitement. I mean, they were birds after all. Having only one manual focus lens with a maximum focal length of 100mm, it would have to suffice.

The SMC Pentax-A 35-105mm was the lens of choice as it possessed nearly the quality of a prime along with a medium telephoto focal length to start with. Below is a full crop image taken from a distance of 10 feet at 105mm. The lens is fast at f3.5 with great color rendition and saturation. Sharpness too is excellent for a 1980s lens. Having an auto aperture mode, the camera would handle the exposure and shutter speed. My only work was to get the focus right and I thought I was there. The other issue was that since I was going to have to use manual focus lenses, I could not use the continuous AF mode.

So how hard could it be? The challenges became evident when I actually got down to shooting those pesky wondrous creations of nature. In order of necessity, they were:

This can be really hard especially when the birds are in trees. Birds evolved to be camouflaged against the backdrop of nature. A green parrot in a tree just blends in. It took some amount of patience to learn to tune in to a birds sound and then practice spotting them in trees. I had to stay calm to focus my ears on the sound and then learn to look for subtle movements in the leaves before spotting them to get ready to shoot. If I couldn’t spot, I had no attempt at a photo.

Below is an example of an average photograph. The pigeon is just sitting on the railing. It does not inspire as a great shot. 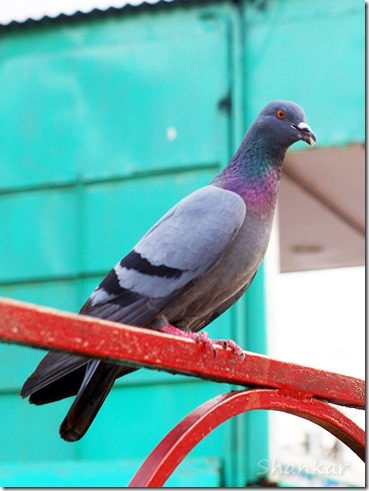 So the next was to try a slow moving bird. I tried a bird that was about to stop. This gave me a little more time to focus and try. The below shot was taken as 5 shots and the best one posted. It is a little more active. It was set at an aperture of f3.5 with a shutter speed of 1/250 at 50mm and ISO 200. 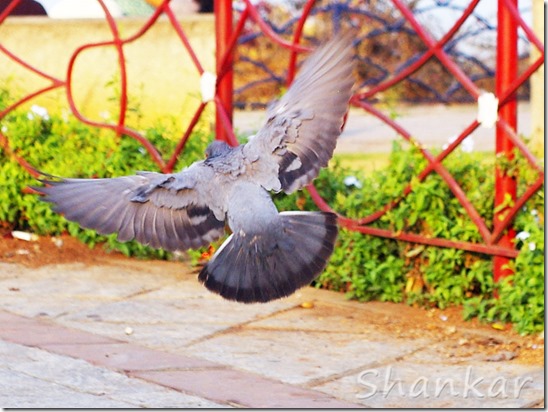 Lastly, I tried taking a fast moving set of birds. There was more activity but the focusing got a lot more harder. The best I could get was the below where only the tail came into focus. This was at an aperture of f3.5 with a shutter speed of 1/250 at 50mm with ISO 200. 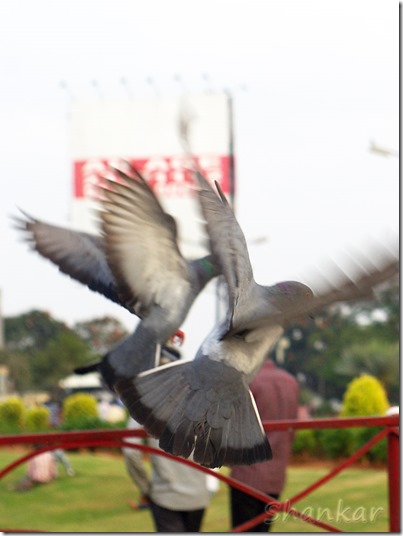 Birds are scared. Always. Period. The slightest rustle from me and they would go away. I had to learn to be absolutely still. Ideally, a body movement is seen more easily. Head movements are noticed less and eye movements the least. I got into a comfortable position where I had to sit for minutes at a time and kept the camera closer to my face with the settings all done. If your camera has an auto shut off set for 1-2 minutes, you may want to turn that off as you need the camera on at any time to shoot.

Ample light is needed to shoot birds. I found it best to shoot birds in the early mornings or late evenings when the sun’s rays are slant. This gave a better effect, more ambient but indirect light on the lens. Afternoon photography is great too but I had to have the sun behind me at all times. Direct sunlight from above makes it tricky as the flare appears in the photos.

This photo was taken during sunset. There were no direct sun rays falling anywhere on the lens to cause a flare. Due to decent lighting available, I had a reasonable depth of field at f4.5 with a shutter speed of 1/180 and ISO 200 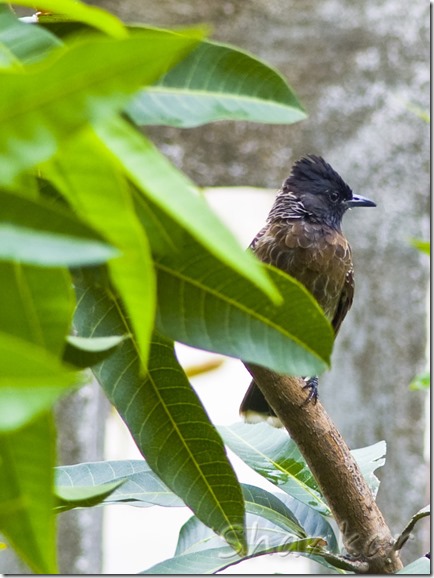 Bird photography is quick. I needed a high shutter speed to avoid blurs. This meant I needed a wide open aperture. In good light, an f5.6 and lower is desirable. An aperture of f2.8 to f3.5 would be great to have. The problem is with lower apertures, the depth of field greatly reduces. I needed to have excellent focusing skills to capture the image. Having shutter speeds of 1/60s or above is desirable to avoid motion blur.

This photo of the parrot in the tree presented a low light situation during sunset. Fortunately I could achieve this with with f3.5 and shutter speed at 1/125 but had to bump the ISO to 400 to get some brightness. It still gave a presentable result. 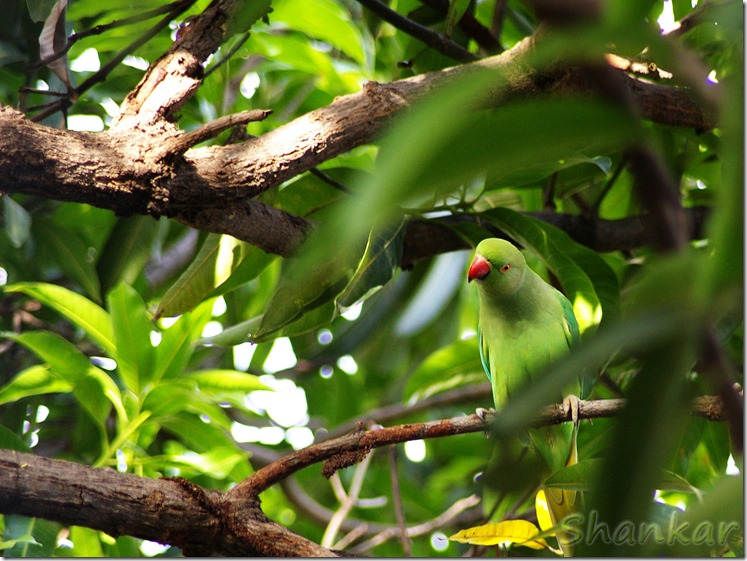 The below photo was a challenge as the bird was directly above me and I had to contend with the light behind the bird. To achieve good focus, I set the aperture to f9.5, kept the centre focus on the bird and used a lower shutter speed of 1/60 at ISO 400. This gave an average photo but with the right expression after about 4 shots. 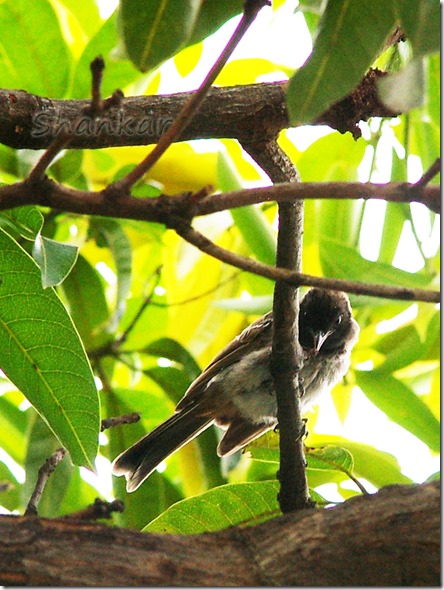 Once the subject is found, then focus as quickly as possible and shoot as many photos as possible while moving the focus from less than ideal focus to focus to over the focus range. I had to take as many as 6 photos at times to get one good focused shot. Distant shots are harder and as there is no hard copy printing of the photos involved, I could afford to try multiple shots.

The below shot was the best out of 8 that I could manage. Both birds were moving constantly and I had to keep shooting by keeping one in focus. But having a bright background caused it to get tricky. As a result, I could manage with an f4.5 which allowed for reasonable depth of field with a shutter speed of 1/180 and ISO 200. But as you can see, there is purple fringing in the photo. Nevertheless, it was a success as both birds were in focus though they came out dark. 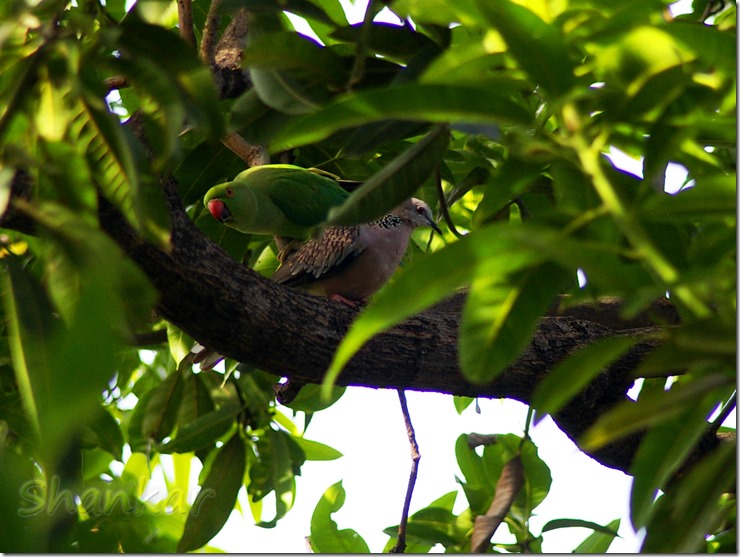 As you can see, it is possible to achieve some results using MF lenses on a resonable camera. The satisfaction I have is having had to work hard to get the right focus with the available ambient settings. It is hard to do and the opposite of this is to have a nice 300mm AF lens on an AP.C sensor where all I have to do is keep the lens pointed at the subject, let the camera do the focusing and then shoot. But for a budget set of gear, the 6 year old $150 camera and 30 year old $100 lens sure do a nice job.

Make no mistake, bird photography is exciting because it presents a challenge of different sorts. It demands patience, being still and working with the elements. The satisfaction is more for oneself.

Posted by Vidhyashankar K at 1:11 PM