Osho – The Zen Manifesto – Freedom from Oneself 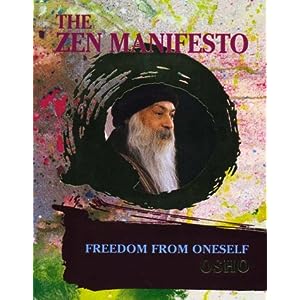 One of the last series of talks given by Osho before his demise, this book is a gold nugget. Osho unravels the mysteries of Zen by approaching it with a totally detached view of religion. It applies to any human who can read and understand or is willing to look at the fact that there could be a key to getting out of the daily routine of days, routine of the life-death cycle, routine of re-incarnation.

The talks made in this book are like a final message with no holds barred on the truths. It has an affinity to the Advaita Vendanta (non-duality) which offers a structured methodology of scriptures and renouncing oneself under the guidance of a Master. However, the major difference is that while Zen too can be practised under a Master, it is more about bypassing or going over the mind completely.

Our identity, our individuality, our saneness are all due to the mind. We call ourselves by an assigned name in this birth because it was given to us. It is important too as we need to survive the lifetime. But after a stage, the search for the Supreme, God, Higher Self, the Nothing or Oneself or whatever one may call it begins to happen only when we question our own actions and decisions.

The Western Zen authors such as Alan Watts and Thomas Merton have also approached Zen but through the intellect which is exactly what Zen is not about. It is about having no mind at all. The mind is the bridge between the soul and appeared sanity. Zen shows that you never had a name or individuality. You were just living in a cage built by others to safeguard your identity. Zen shows you how to open that cage and melt into the vastness and disappear; or what we know as anatta which means ‘‘the freedom from oneself’’.

The complete book can be found here. The Zen Manifesto- Freedom From Oneself - Osho

Posted by Vidhyashankar K at 11:34 PM