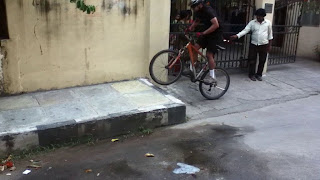 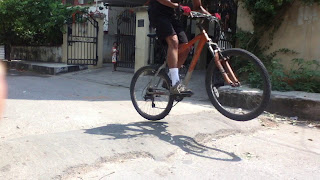 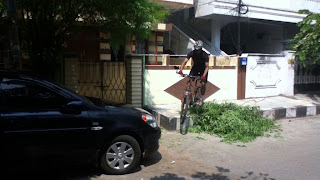 This is what I do as often as possible on a daily basis to reach office. Tiny hops over Himalayan speed breakers and kerb hopping on foot-high pavements. I’ve been cycling to work almost everyday for the last three years barring the horrible summers where the effort on the cycle is just not worth the time taken to cool down after reaching office.

The 4300 has held strong on every count. I ride hard. For me, the game is to reach office without putting my foot down anytime except for the red lights. And the apathy of the municipal authorities is a fantastic boon to an MTB owner. Potholes and stones won’t break my bones. The roads are made with tar mixed with salt and sugar. One little drizzle and the tar dissolves away leaving dangerous craters in the form of potholes. And when the rain fills them, one has no idea where the potholes are.

Now imagine riding at speeds of above 25 km/hr and ramming your 12 kg cycle into one of these potholes holding your weight of 65+ kilos. Its enough to bend a wheel. But not on the dinky little 4300. This VFM cycle has handled most everyday abuse that I’ve thrown at it till now without a single issue. 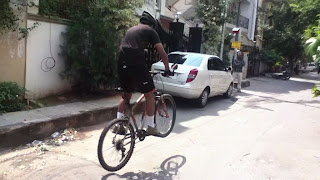 Frame: Very suited and balanced for speed on trails. The composure it maintains on bad roads and trails has to be ridden to be believed. The compact nature of this bike gives it great maneuvering in traffic and on sharp bends. 2 feet drops are a cinch.

Suspension: Absorbs all the thrashing very well. Any hopping off kerbs is first done on the front wheel as this is a hardtail. The Gila forks have managed well till now and continue to take a beating.

Ride: Plush. The difference between the MTB and a road bike is like a Hummer and a Nissan GTR. The Hummer loves it when the going gets rougher. The GTR burns tarmac. Pretty much the same here. The 4300 is NOT for racing. It is the bad boy only on the trails and a laggard on the road behind roadies. But it is possible to achieve 40 km/hr in traffic. The paradox is that the shorter straight handlebars actually help maneuver well between cars. But on a trail, on a kerb, on sand, this bike shows off its ability. I have ridden on a thin layer of sand many a time with so much construction happening these days. This bike did not skid even once. On a trail, it exhibits so much control with the tyre pressure set to 40 psi. On the road, I set it to 60 psi and it works great. This bike works well on all surfaces. It has and continues to serve my commuting purpose to office since day one very well. It is perfectly suited to commuting. The extra effort needed to pedal actually helps lose more calories. If you’re a long distance rider, a hybrid would be better. But for an all round purpose, this is just great.


Quality: I love the sealed bottom bracket. During the rains, it is a common story in to see sewage overflowing on the roads. The flowing water on the roads could be set to a biohazard level. Through all these 2 feet high levels, the 4300 just wades through as if nothing ever happened. I have changed gears while they were completely submerged under water. Both derailleurs worked fine each time. I go home and pour a little clean water to rinse off the muck. And the 4300 is waiting the next day without as much as a creak to ride all over again. No component has worn out till now. I have had to only change the brake pads twice during the 5000 kms mileage. Every other component is holding up just great. The forks, drivetrain, wheels, tyres, handlebar, frame, brakes and even the grips are all in great condition.

Brakes: I ride hard and fast only because I trust the V-brakes. I love doing brake turns and the V’s stop the wheels almost instantly. Skidding rubber is something I like on turns and these brakes do not fail me. The pads get worn out but that’s how it should be. The brakes are the single component subjected to the most violent frictional forces in any vehicle. If I can go fast, it is only because of the trust I have on the brakes to stop me in time. And they work great even in the rain.

Issues: None till now.

The 4300 is a very very dependable bike. It has taken abuse on a regular basis and still sings along happily. I have no regrets whatsoever and am more than happy to suggest this to anyone looking to buy a bike in to consider the 4300 as an entry level serious performer for daily use. I thank Rohan Kini of www.bumsonthesaddle.com for his invaluable suggestion to get this bike.

Posted by Vidhyashankar K at 10:28 PM

More than the bike in itself, which seems to be a legend, I respect the sheer persistence and stamina you show all these years for something you love so much doing...Sincere hats off...May your aerodynamics skills fail the gravitational constant, studied long back in Physics textbooks

Excellent balanced review Shankar! I love the way you do all those little tricks to get through the urban jungle while commuting. It's been three years since I started commuting as well. I remember interacting via email with you in those initial days. You were also a neighbor of Krish(TBA)if I remember correctly. Keep going. :)

Thank you Venkat. Good to see you're back in India. I very well remember your long trips and loved your post on the ride in the snow. Doing that uphill in subzero temperatures must have been quite a challenge. Krish and I are in touch. Do keep posting. I enjoy reading your adventure ride posts.

Hi What do you mean by long distance. My office is 10kms from home. Should I think of a hybrid or trek 4300 ?

Long distances mean different things to different people. And it depends on the terrain. When I started out, 5 kms seemed long. Now, 50 seems long. Your distance of 10kms from home is a distance which you should be able to do in about 2-3 months after your start biking.

A hybrid and a 4300 have very different characteristics. A hybrid lets you go longer distances with lesser effort. Its great for the tarmac. The 4300 on the other hand can be abused on speed breakers and potholes. But you need to put in more effort to move compared to a hybrid. It all boils down to your primary use of the cycle. Try both first hand before buying. Good luck.